The  ARINC 429 Specification defines the standard requirements for the transfer of digital data between avionics systems on commercial aircraft. ARINC 429 is also known as the Mark 33 DITS Specification. Signal levels, timing and protocol characteristics are defined for ease of design implementation and data  communications on the Mark 33 Digital Information Transfer System (DITS) bus.

ARINC 429 is a privately copywritten specification developed to provide interchangeability and interoperability of line replaceable units (LRUs) in commercial aircraft.

Manufacturers of avionics equipment are under no requirement to comply to the ARINC 429 Specification, but designing avionics systems to meet the design guidelines provides cross-manufacturer interoperability between functional units. 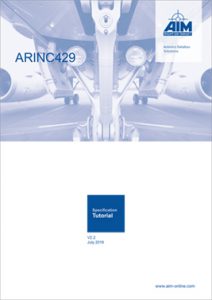 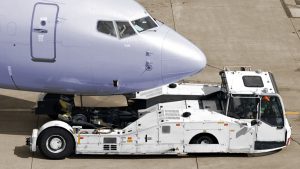 ARINC copywrites and publishes standards produced by the Airlines Electronic Engineering Committee (AEEC). The AEEC is an international standards organization made up of major airline operators, avionics industry manufacturers and ARINC members.

The AEEC sets standards for avionics equipment and systems and provides industry defined requirements for standardization of form, fit and function between various manufacturers products.

Specifications are used to define 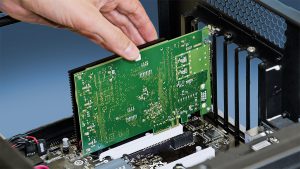 The ARINC 429 Specification developed out of the original commercial aviation digital communication spec, the ARINC 419 Specification. The ARINC 419, first released in 1966 and last revised in 1983, describes four different wiring topologies, including a serial, twisted shielded pair interface used by the Digital Air Data System (DADS), known as the ARINC575 or DADS 575 Spec. 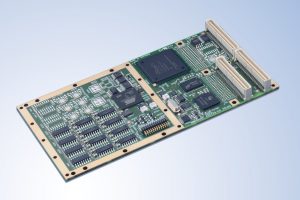 ARINC 429 defines both the hardware and data formats required for bus transmission. Hardware consists of a single transmitter – or source – connected to from 1-20 receivers – or sinks – on one twisted wire pair. Data can be transmitted in one direction only – simplex communication – with bi-directional transmission requiring two channels or buses. The devices, line replaceable units or LRUs, are most commonly configured in a star or bus-drop topology. Each LRU may contain multiple transmitters and receivers communicating on different buses. This simple architecture, almost point-to-point wiring, provides a highly reliable transfer of data.

A transmitter may ‘talk only’ to a number of receivers on the bus, up to 20 on one wire pair, with each receiver continually monitoring for its applicable data, but does not acknowledge receipt of the data.

A transmitter may require acknowledgement from a receiver when large amounts of data have been transferred. This handshaking is performed using a particular word style, as opposed to a hard wired handshake. When this two way communication format is required, two twisted pairs constituting two channels are necessary to carry information back and forth, one for each direction.

Transmission from the source LRU is comprised of 32-bit words containing a 24-bit data portion containing the actual information, and an 8-bit label describing the data itself. LRUs have no address assigned through ARINC 429, but rather have Equipment ID numbers which allow grouping equipment into systems, which facilitates system management and file transfers.

Sequential words are separated by at least 4-bit times of null or zero voltage. By utilizing this null gap between words, a separate clock signal is unnecessary. Transmission rates may be at either a low speed – 12.5kHz – or a high speed – 100kHz.

The transmission bus media uses a 78W shielded twisted pair cable. The shield must be grounded at each end and at all junctions along the bus.

The transmitting source output impedance should be 75W ± 5W divided equally between Line A and Line B. This balanced output should closely match the impedance of the cable. The receiving sink must have an effective input impedance of 8kW minimum.

Maximum length is not specified, as it is dependent on the number of sink receivers, sink drain and source power. Most systems are designed for under 150 feet, but conditions permitting, can extend to 300 feet and beyond.

Data is transmitted in a bipolar, Return-to-Zero format. This is a tri-state modulation consisting of HIGH, NULL and LOW states.

Transmission voltages are measured across the output terminals of the source. Voltages presented across the receiver input will be dependent on line length, stub configuration and the number of receivers connected. The following voltage levels indicate the three allowable states:

In bipolar, Return-to-Zero – or RZ – format, a HIGH (or 1) is achieved with the transmission signal going from NULL to +10V for the first half of the bit cycle, then returning to zero or NULL.

A LOW (or 0) is produced by the signal dropping from NULL to –10V for the first half bit cycle, then returning to zero.

With a Return-to-Zero modulation format, each bit cycle time ends with the signal level at 0V, eliminating the need for an external clock, creating a self-clocking signal. 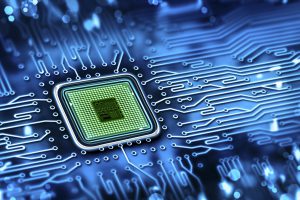 ARINC 429 protocol uses a point-to-point format, transmitting data from a single source on the bus to up to 20 receivers. The transmitter is always transmitting, either data words or the NULL state. Most ARINC messages contain only one data word consisting of either Binary (BNR), Binary Coded Decimal (BCD) or alphanumeric data encoded using ISO Alphabet No. 5. File data transfers that send more than one word are also allowed.

The only two fields definitively required are the Label and the Parity bit, leaving up to 23-bits available for higher resolution data representation. Many non-standard word formats have been adopted by various manufacturers of avionics equipment. Even with the variations included, all ARINC data is transmitted in 32-bit words. Any un-used bits are padded with zeros.